A Short History of WSN

The Start of WSN

Western Society of Naturalists (WSN) was officially created at San Diego High School in August 1916. The roots of the Society, however, go even earlier when six prominent west coast biologists, among them Vernon Lyman Kellogg, Harry Beal Torrey and Charles A. Kofoid, met in a restaurant in San Francisco in 1910 and founded the Biological Society of the Pacific (BSP). These founders, perhaps motivated by the lack of scientific meetings on the west coast, designed a society to include “Any person interested in scientific work of a research nature. 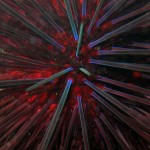 “[The] founders…designed a society to include ‘Any person interested in scientific work of a research nature.’…”

The First Annual Meeting of BSP was held on Saturday, April 1, 1911 at the University of California at Berkeley, and included four afternoon paper presentations and a dinner at the Hotel Shattuck. A joint public session was held with the newly formed Pacific Coast Association of Scientific Societies(forerunner of the Pacific Division of the AAAS) that included talks by the presidents of both Berkeley and Stanford Universities.

At the Fourth Annual Meeting in Seattle, it was announced that the American Society of Naturalists (ASN) had invited BSP to merge with ASN as the Pacific Coast Branch. This merger was approved by the membership at the annual meeting in San Francisco in August, 1915, and the name “Biological Society of the Pacific” was abandoned. However, the proposal for merger was rejected by the Executive Committee of ASN at their annual meeting in Ohio in December, 1915. Upon reconsideration, ASN apparently realized that they did not allow members to join as a group and were concerned that a Pacific Branch might not be sufficiently selective in admitting members.

Faced with what they described as an “embarrassing position” resulting from this ASN decision, the Executive Committee of the newly formed Pacific Coast Branch of ASN proposed to abandon this name and organization and form a new society, “The Western Society of Naturalists,” that would include all members of the former BSP. The re-organization and new by-laws were approved at the August, 1916 meeting at San Diego High School. WSN was thus officially founded in 1916, and appears to be the second oldest surviving natural history society on the Pacific Coast.

The Western Society of Naturalists 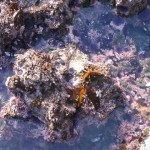 “From its beginnings in 1910, the organization and means to accomplish the goals of WSN have remained surprisingly constant and simple…”

From its beginnings in 1910, the organization and means to accomplish the goals of WSN have remained surprisingly constant and simple – a small group of officers and a few other members work together each year as an Executive Committee to organize one or more meetings open to all individuals interested in biology. The cause of this consistency is no doubt because the Society continues to meet important scientific and social needs of its members. Most of the officers have been members who, prior to their election, consistently attended meetings and presented papers, organized symposia, and otherwise took an active part in the minimal amount of Society business. Long-time members often comment that a WSN meeting was the first scientific meeting they attended, and the venue where they gave their first papers.

WSN has never published a journal or funded other expensive programs, and has tried to keep membership and meetings inexpensive and informal. Many meetings in the early years had fewer than 20 papers, but they always included dinner. As the Society and length of meetings grew, dinners became Presidential Banquets, and ‘discussion’ events like the present Attitude Adjustment Hour were added. The Society has, at least since the early 1960’s, also actively encouraged student attendance and papers at the annual meeting, and students are supported with reduced dues and registration fees, and travel and best paper awards.

WSN has primarily held annual meetings, with locations roughly alternating between southern California and either central/northern California, Oregon, Washington, or Canada. Executive Committees, at least since the 1960’s, have attempted to vary meeting locations along the west coast between San Diego and Vancouver. Since 1928, annual meetings have traditionally been held between Christmas Day and New Year. Annual meetings have occasionally be held with other societies, particularly the American Society of Zoologists. The Society also co-sponsored 10 International Symposia between 1973 and 1988 under the leadership of Secretary D. Montgomery.

The 1997 meeting is listed as the 78th Annual Meeting. No meetings were held in 1942-44. Thus, since the Society was founded in 1915, the 1997 meeting should be the 79th. Perhaps whoever started this count considered the 1915 meeting the founding meeting, with the first meeting beginning in 1916?

While the Society has always been western without regard to country, most members have been from the western United States, particularly California. Perhaps the most notable trend in membership has been the recent relative increase in U.S. members outside the western states. The 77th Annual Meeting was held in Mexico, in part to increase participation of Mexican colleagues in the Society. 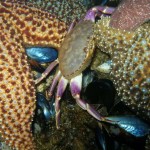 “Contributed papers presented at meetings until 1970-71 were fairly balanced by habitat but WSN is presently very marine oriented.”

What do WSN members do between New Year and Christmas? Contributed papers presented at meetings until 1970-71 were fairly balanced by habitat but WSN is presently very marine oriented. Plants, invertebrates and vertebrates were also fairly evenly represented until the 1970’s when papers on invertebrates began to dominate. Fields of study have ranged widely, but ecological papers are presently most common.

Do these trends in papers represent real changes in emphasis in biology? Are they artifacts of the formation of more recent, specialized societies that have captured some of the former members? It may be that WSN itself encouraged this trend. In his foreword to the published proceedings of the 1929 meeting, Secretary C.V. Taylor noted that most members resided along the Pacific seaboard where opportunities to work in marine biology had increased with the full time operation of several marine stations, and that “In recognition of this growing interest, the Western Society of Naturalists has instituted mid-winter meetings which have been devoted largely to work accomplished and in progress on the biology of the sea.

No doubt the true history of WSN occurs every year but is not recorded – the ideas stimulated and tested, collaborations formed, careers launched, and friendships made and revisited as a result of papers presented and the informal social interactions that follow. Hopefully the Western Society of Naturalists will continue its long tradition of stimulating interest in and understanding of nature, and adjusting attitudes.

“The object of this society shall be the stimulation of general interest in the fields of biological science. The society shall be broad enough in scope and liberal enough in its organization to meet the needs of all naturalists.” 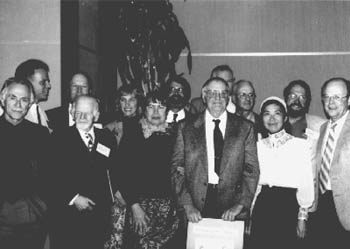 Photo of past WSN presidents with former long-time Secretary D.H. Montgomery and his wife Gerry Montgomery.

This short history is based on the HISTORY OF THE WESTERN SOCIETY OF NATURALISTS, written by Michael S. Foster, Gayle Hansen (Hatfield Marine Science Center, Oregon State University) and Yost Amrein (Pomona College) and published in 1998 by the Santa Barbara Museum of Natural History. The full history has a much expanded narrative, copies of early documents related to the founding of the Society, original and current Constitution and By-Laws, statistics on trends in membership and papers, biographies and photos of some notable members, and a complete listing of officers, meeting places, International Symposia and best paper awards since the Society was founded.It is available for purchase by contacting: