Marine research in northwest Mexico: past, present and future 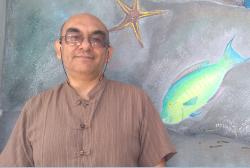 PhD in Marine Biology and Fisheries (University of Miami, 2004), and full.-time professor at Universidad Autónoma de Baja California Sur, in La Paz, Mexico. Director of 44 undergraduate, 32 Masters and 15 PhD students, and responsible of 9 postdoc researchers. Dr. Reyes Bonilla has been in charge of 50 research projects funded by Mexican and international government agencies, foundations and NGO´s, and published 202 papers (131 in JCR indexed journals) that have received over 4,100 citations according to Scholar Google. He is member of the Mexican Academy of Sciences, and has received several awards including the Medal for Nature Conservation granted by the Mexican Secretariat of the Environment, and the Science and Technology Prize awarded by the state of Baja California Sur. The researcher was in charge of the Biodiversity section of the Mexican Long-Term Ecological Research Network, president of the Mexican Society for the Study of Coral Reefs, council member of the International Coral Reef Society, co-coordinator of International Affairs of the Mexican Carbon Program, and is a current representative of Mexico in the Global Coral Reef Monitoring Network. He is also a reviewer of the status of eastern Pacific coral species for the Red List of the International Union for Conservation of Nature (IUCN), advisor of the national representation of Convention on International Trade in Endangered Species of Wild Fauna and Flora (CITES), and is council member of several conservation organizations like Pronatura Noroeste, Fondo Mexicano para la Conservación de la Naturaleza, Fondo Noroeste, and Defensa Ambiental del Noroeste. Finally, he provided scientific information that helped establish the first fishing refugee in the Gulf of California, and to support the management plan of five national parks and biosphere reserves, including Cabo Pulmo and Revillagigedo Archipelago national parks (both World Heritage Sites for UNESCO), as well as the inclusion of Espíritu Santo Archipelago National Park in the Green List of IUCN.